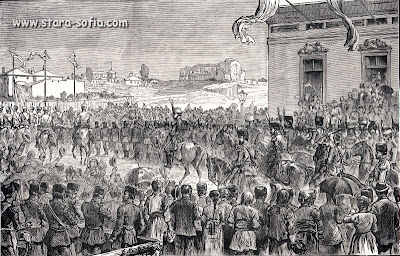 
The proceedings at several towns in Bulgaria on the occasion of the arrival of Prince Ferdinand of Coburg, who has been elected by the Sobranje or National Assembly to rule over that State, but whose election has not been confirmed, in accordance with the Treaty of Berlin, by the sanction of the Saltan and by the assent of the several Great European Towers, were related in our last week's publication. His entry into the city of Sofia, on Monday, the 22nd ult., is the subject of one of our Illustrations, from a sketch by our correspondent there. His Highness came by railway from Philippopolis, and entered the city at half-past six in the evening. He rode on horseback, and appeared in the uniform of a Bulgarian General, his breast being covered with a blaze of decorations. The Prince was surrounded by a brilliant staff, all in gala uniform. A great concourse of the citizens met him, while deputations representing every guild, every public association, every creed and race, marched out with flags and banners to present their addresses. Ladies in gay attire, with bouquets in their hands, were present in large numbers; schoolchildren were posted to scatter flowers on the road. The troops were employed to line the road, and without arms. The Prince first went to the Cathedral to receive the blessing of the Church; and while this ceremony was going on, a long-threatening thunderstorm broke over the city. Afterwards as he stood in the courtyard of the palace receiving the congratulations of the officers, while the guns were firing the salute, and the military bands were playing the Bulgarian National Anthem, the darkening gloom of the evening was broken by repeated flashes of lurid lightning. At half-past seven Prince Ferdinand entered the palace; and the Princely flag with the Bulgarian lion, hauled down nearly twelve months ago, after the departure of Prince Alexander, was once more silently hoisted over the roof of the palace.